Engine #4 The Pride of Wilson 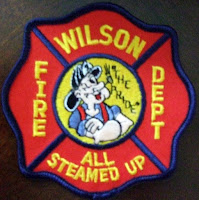 I really love a lot of things. Two of them are old fire engines and trading patches. I met a firefighter the other day from the Wilson Fire Department in CT.  I did not have a chance to get a lot of information on the department and when I looked it up on the internet I did not find much either.  The interesting part about the department is that they have a functioning  1901 Amoskeag  steam engine.  I found a little bit of information from the Connecticut Historical Society and the Connecticut Fire Museum.

In the picture below: The new propeller, No. 4, extra size Amoskeag, known as the Pride of Hartford. It was the largest engine of its kind at the time. The photo was taken in front of the station at 60 Ann Street. At the throttle, Engineer John C. Moran; in rear, Assistant Engineer Charles F. Grundt; and at the wheel, Tillerman Warren A. Bingham. Photo by William G. Dudley, probably 1901. 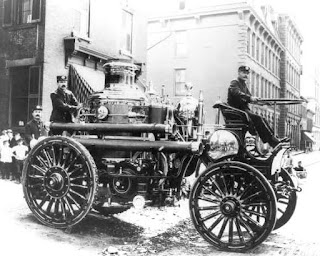 The original image is here. at the Connecticut Historical Society website. According to the book Greater Hartford Firefighting (CT) (Images of America)

the engine was retired in 1925 and later moved to the Wilson Department.

Popular posts from this blog

January 28, 2022
Whatever your career we all need to get some exercise and it is not always easy to find a good place to workout or to find a fun workout that is inexpensive. Since the kids were little my wife has always enjoyed playing Just Dance as an easy and inexpensive way to work out at home. When the kids were little she orginally played on the Nintendo Wii and the kids were able to play along. What a win-win since she got a little break and was still able to keep the kids occupied. Recently the Wii finally died and she did not really want to buy a Switch since the kids are pretty grown now. She recently got a subscription to Just Dance Now for $24.99 per year via the Google Play Store. This allows you to play the game with a large library of songs by using your phone as the controller and then casting the video to another screen via Chromecast.  She was having a lot of issues as we have an older Chormecast and it kept disconnecting all the time. After getting totally frustrated she was
Post a Comment
Read more

April 24, 2011
In my continuous search for fire simulators, today I came across a German PC game. The game is called Feuerwehr Simulator 2010 . Below is the trailer and I went to the website and used Google to translate it. Here are the details of the game: What Fire fans have been waiting for. The fire simulator 2010 provides for the first time a realistic fire simulation from a first person perspective of the fireman. The development studio VSTEP also stands out for professional fire simulations for firefighters. Take on the role of one or more men of a fire station. In various scenarios, you have to fight fires or rescue people. Here you have the extensive use your equipment vehicles: tubes / pipes, axes, aerial ladder, breathing apparatus etc. The following missions are in the simulation: •Small fire in a locked house •Burning gas station •Traffic accident in tunnel •Train accident •Save children from a burning building •Fire on a ship in port •Truck accident involving hazardous
Post a Comment
Read more

Firefighting Career For the Sims 2

May 14, 2009
If you have the Sims2 video game for you PC you can download this firefighting career I made and install it for your game. Includes uniforms, reward object, and two recolored vehicles This career has been compatible with all expansion packs, but I have not tested it on any expansion packs since late 2008. Number of Levels: 10 01 Firefighter Recruit 02 Firefighter 03 HazMat Technician 04 Driver/Operator 05 Lieutenant 06 Captain 07 Battalion Chief 08 Assistant Fire Chief 09 Fire Chief 10 Fire Commissioner Download File Here and clict the files tab. Install Instructions: Basic Download and Install Instructions: 1. Download: Click the download link to save the .rar or .zip file(s) to your computer. 2. Extract: Use WinRAR (Windows) or Stuffit (Mac) to extract the .package file(s) from the .rar or .zip file(s). 3. Place in Downloads Folder: Cut and paste the .package file(s) into your Downloads folder: Windows XP: Documents and Settings\(Current User Account)\My Documents\EA Games
1 comment
Read more